Showing posts from December, 2011
Show all

By Leif Anderson - December 09, 2011
I've been slaving away nonstop, only taking breaks to eat and go to the bathroom, and I am happy to report that the video edit from the Big Thompson this fall is finally done. The Big Thompson is one of my favorite training runs. It is far more difficult than it is dangerous, and it's not very safe. The rapids are very continuous, but the creek is small enough that if you swim you can get out without too much trouble. You can bash your way down it without being exactly on line, but you can definitely tell when you're running the smooth line and when you're out of control. It's only about an hour from my house, too, which is the same distance away as the Poudre. On top of all that, since it's dam release, the best flows usually happen in the late fall, when everything else in the state is totally dry. Most of the moves are fast linked small moves, but there are a couple big power boofs mixed in there. Since we usually go up there and run several laps,
Post a Comment
Read more 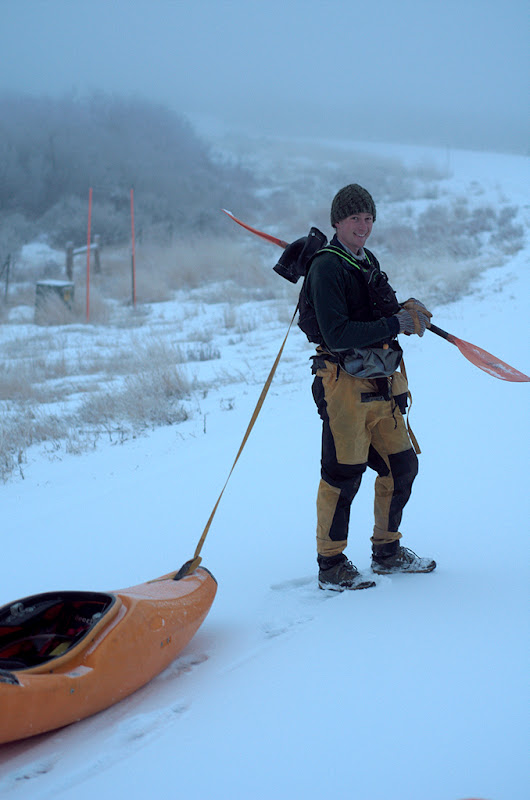 "So, Ben, are you sure? I don't think they're predicting the temperatures to be much above freezing." "Yeah, well, it's supposed to be snowing, so it won't be that bad." "Oh, right, good point." With that exchange, I decided to commit to one of the most intense endeavors ever attempted by humankind: a one day descent of the Black Canyon of the Gunnison... in December. I had been calling all the paddlers I knew in Colorado, trying to find someone to paddle with. Every time someone backed out because it was too cold, I would admit that I wasn't really that serious. Then, late friday afternoon, Ben Luck of Durango finally returned my call, and described how he was about to do a solo descent of the Black Canyon. I couldn't let Ben hog all the glory for himself, so I invited myself along. I started packing immediately after hanging up, and arrived in Montrose at about 1:30 AM. Ben was highly in favor of an early start, so
3 comments
Read more
More posts