Showing posts from May, 2008
Show all

Natalie and I checked out Slater Creek way back around May 2008, but it was the first group of photos that I laid hands on, so I decided to post it first. Also, there aren't many photos. We got stuck while trying to find the falls, which killed about half the day. We were pretty glum about it, since we thought that we wouldn't be able to get in to the falls through the snow. We drove around the back roads in the area and eventually decided to ask directions at the hunting lodge nearby. They told us how to find the falls, and we eventually ended up driving right back to where we'd gotten stuck, parking there, and hiking down the hill to the creek. When we finally arrived at the creek, we found that it was in full flood. We had been hoping to run some of the rapids upstream, not just the falls, but decided that the upper run was out of the question. After a careful safety discussion, I suited up and gave the falls a shot. The results were less than spectacular.
1 comment
Read more 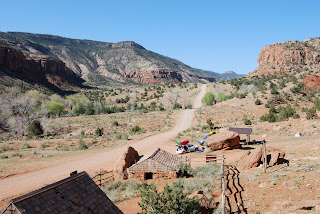 After a fun, but short 1-day West Water trip, Leif and I checked out Escalante Creek. We arrived late at night (I was asleep of course so I couldn't tell you how to get there) and when we woke in the morning we found ourselves in a beautiful desert canyon. Morning photo of camp with historic buildings in foreground- Photo by Leif Leif and I suited up to check out what this creek had to offer. The first big rapid called Leap of Faith proved to be much less of a leap than I imagined. This leap of faith pales in comparison next to the leap of faith on the north fork of the south fork of the trinity in northern Califonia. That leap of faith was bordered by vertical walls with no option of portaging or even scouting. Not only that, but the 7ft drop is backed up by a hole you are bound to party in, and then immediately downstream is a must portage class VI rapid that may have only been run by Charlie Center (not sure my facts are straight, but I think I remember Dan Menton tell
Post a Comment
Read more
More posts