Showing posts from July, 2008
Show all

Short Stop at the Payette 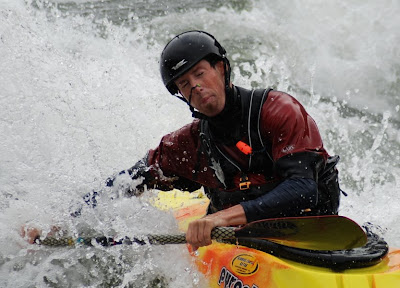 On the way up to the Slave River, Natalie, Conor and I stopped by the Payette. We played at Climax, and Conor and I did a top-to-bottom on the North Fork. It wasn't quite as sketchy as the first top-to-bottom that I did, a couple years ago with Natalie. That first time, we had no guide, had never done the section before, and only scouted one rapid. This second time, we had a guide, if you count running the stretch once as guide training. But like I said, first we played at Climax. Here we learned about the many faces of Conor Flynn. Observe: The Helix face The Right Blunt face The McPistol face He makes those exact faces, plus one other one for the Left Blunt, every time. This was my first day in the production Large Nemesis. I had been in the prototype for a while, and the boat performance had been perfected before the final generation proto, but there was a little more footroom in the production model, which was nice. Plus, the whole boat was just so shiny and perf
Post a Comment
Read more
More posts